How Often Should You Replace the ‘Natural Oils’ in Your Shakes?

Never. There, wasn’t that easy? Actually, the idea of “replenishing natural oils” in cedar shakes has been around a long time and until fairly recently was a concept to which most of us blindly nodded our heads.

“…these oils account for less than 3% of the total mass.” (And that was when the tree was alive!) “…applying ‘replenishing oils to weathered shingles may be of questionable value…” “…unless you include an effective mildicide or preservative, an oil-like linseed may provide an additional food source for mold, mildew, and fungi…”

“Furthermore, petroleum-based products are likely to be oxidized (broken down) by sunlight, to have only a short-lived effect, and to increase the flammability of the roof.” 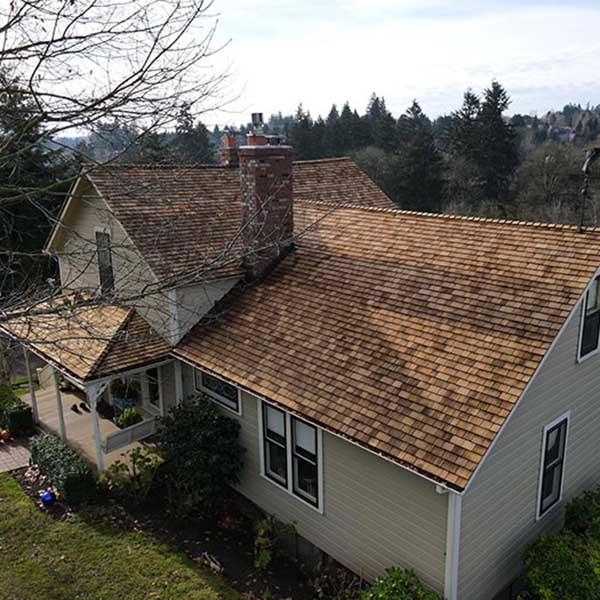 About Half as Often as You Replace the Natural Oils

After a roof has been pressure washed, it looks “brand new.” That’s because it is. There is just one problem – the roof is now not as thick as it once was. Pressure washing tears away that silvery gray layer of wood cells, the presence and color of which could have been preserved. Your roof has now been made thinner by anywhere from 1/8” to as much as 3/16”. Then when your roof turns dark gray again, which it will relatively quickly, the idea is that you “renew” your roof by removing that much material again! I don’t get it. Why would anyone want to remove years of useful life from their roof?

An added ‘benefit’ to pressure washing is now all that former roof material, in addition to the debris, dirt, and fungal growth (the slimy stuff) is splattered all over your siding, windows, lawn, shrubs, sidewalks, decks, and in your gutters. We don’t use a pressure washer to make a roof look new for the same reason we don’t use an earthmover to make our lawn look new.

Call Us to Schedule a Service Today

Call Now
Back to the top